When we came back from New Zealand after living in a van for 15 months we knew that we had to get a van in Canada. What we didn’t know coming our way was a pain staking summer of searching and the eventual find of a total relic that literally needed to be brought back to life. When we first started looking we didn’t find much and opted to have a look at motorhomes, but after viewing a few and chatting with mechanics we decided the size was too big and the fuel economy wasn’t ideal either.

The search for vans was limited to Alberta and Saskatchewan for us as that’s where we have residency and wouldn’t need to get an out of province inspection done. We first started in Alberta and looked at a couple that were overpriced pieces of crap. They wanted $5000+ for units full of rust holes and needed considerable interior upgrades as well. We continued looking, but never seemed to be in the right place when the good ones would go up for sale. One night when we were with our friends in Calgary they mentioned there uncle in Saskatoon had one sitting in his driveway that he hadn’t used for a few years. I looked on google map street view and BAM! This was exactly what we had in mind for our next van. They rang him and he said he was willing to sell it to us. We headed to Saskatchewan to have a look at it, and where we eventually learned that it hadn’t started in 8 years.

This is where our journey of bringing our 1980 Ford Econoline 351 M-block 1/2 ton back to life began. We started by siphoning the gas tank, replacing the fuel filter, replacing a couple rubber fuel lines from the fuel pump up to the carburetor, putting a new battery in and turning it over. A couple nights later she was alive, but when I went to put it in reverse I had no brakes. After I bled all four brakes we were back in business, however I wasn’t comfortable driving on the rubber that was currently on it. The van sat so long that the sidewalls were severely cracked and there was permanent flat spots on the bottoms. I sussed some new tires from the wreckers in near perfect condition and got those mounted on the rims. We drove it down to SGI and got some plates and a package policy. Since the vehicle being more than 30 years old we qualified for antique plating. Plates and extra insurance to cover the replacement of the van came to $260 for the year. 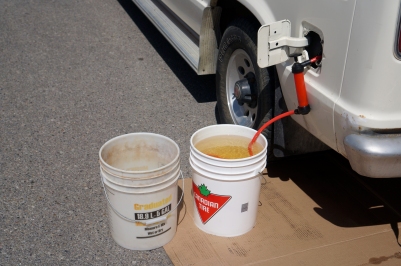 Since it seemed to be running pretty good and we really wanted to renovate the inside, we got to work gutting and refurbishing right away. 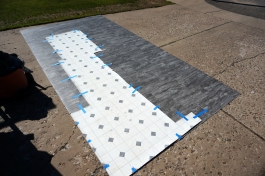 What seemed to be a steal of a deal as it was running good, turned south right away to hitting and missing and running like a royal bag of crap. I took it over to our family backyard mechanic, Richard, where some very long days/nights incurred for the next few weeks. We found three seized valves which were accompanied by bent pushrods coming from the camshaft. A few other basic repairs included; new plugs, new wires, new rotor but that didn’t make it much better. It definitely seemed to fix some major problems, but the van still kept running very poorly. 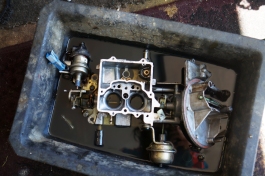 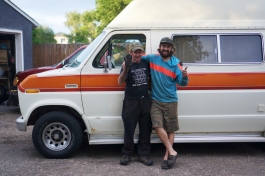 We agreed a carb rebuild was in order so we got a rebuild kit and went to town on it. While in theory this should have made it better, some other new issues were created. This carb had a hot air choke, which basically helps balance the fuel/air ratio when it’s cold and shuts-off when hot air from the manifold gets warm enough and releases this mechanism. While removing the choke the hot air choke pipes all broke off and left an exhaust leak from the manifold. It was right around this time that I was offered a new job position in Calgary for the summer to map trails for Parks Canada, and I had only a few days to get out there.

We got it running decent enough the day before I was meant to start work, however when we started the trek back west we broke down ~80km outside of Saskatoon. Once it cooled down the van started back-up again and were able to drive it back to Saskatoon that same night, and in turn I luckily got my start date also moved back a day. The next morning I replaced one spark plug wire that had been touching the exhaust manifold and melted as well as got a local welder to cut me a proper plate to cover that choke hole we created when we took the carb off. We finally headed west again later that same day, driving slowly and filling up very regularly, because at this time we had no gas gauge telling us how much fuel was in our gas tank. With a little luck we made it to Calgary with no problems. However, the next morning when I left for my first day on the job the van broke down only a couple km’s from Marisa’s parents house where we were staying. It felt like we just couldn’t catch a break! We got the van towed to a local mechanic so a fresh set of eyes could have a look and figure our van problem out.

The mechanic deemed it was a fuel issue and installed a new fuel pump for a handsome price tag. On our way home from the shop it broke down once again. He took it back to his shop and looked at it one last time before deciding he didn’t know how to fix it. If someone who gets paid to fix these problems couldn’t figure it out what chance did I have? It now became not only a challenge but my obsession to figure it out!

I googled, read forums, read and re-read our Haynes manual. At first I thought it was an electrical issue, being that it would run good until it got warm enough and would just quit. Once it cooled down long enough it would start-up again and drive fine until it got warm again. I tried a few things by replacing the ignition relay; NOPE. Then the ignition coil; NOPE. Maybe replacing the ignition control unit (ICU); NOPE. If it wasn’t an electrical problem then maybe the fuel supply must of been compromised somehow? The fuel tank was full of rust and plugging up the filter, which inevitably choking the engine. Operation drop and clean the tank was unleashed!

Once the tank was emptied, cleaned with a vinegar solution and thoroughly washed it went back on. I also removed the fuel pump, fuel filter, carb and cleaned them all of the rust that was in the system. The problem was solved (I thought)! I drove the van for an entire week with no problems besides an overheating issue, but it was also 30-40 degrees out everyday this summer so I wasn’t too concerned. When that week was up and I was on my way home from work one day, I broke down once again and stalled on Stoney Trail, which is not a road you want to break down during rush hour!

This is now about mid-July and we decided to get a new tank from the only place we could find, Rockauto, and it was coming from Texas along with a new fuel level unit as the current one inside the tank (right picture) was toast. When it all arrived we once again dropped the tank, removed the fuel pump, fuel filter, carb and cleaned the system all out before re-installing. A few weeks had passed and it seemed to have fixed our breaking down in the middle of the road problem we were having. The engine heat gauge was still rising so I replaced the thermostat and did a full rad flush, but it was still rising to the high “H” position when driving mid-day in the heat.

It was now the start of August and we were heading to B.C. for a week of mountain biking. We went through Golden, Revelstoke and eventually Silver Star Mountain in Vernon for BC Cup. It was all going good until when we tried to head home when driving down Silver Star and our brakes decided to stop working. I had just bled them before we left Calgary because they felt a bit soft. I tried to do another bleed once we got it to stop with the E-brake on down the mountain road, however I couldn’t get a bleed from the front brakes. The master cylinder had quit working!

After a night-time reverse back-up the mountain road to a safe pullover (thanks Blaire!), a hitch down and up the mountain the next morning in order to get a new master cylinder allowed us to be able to continue our journey back home. And home we made it!

For the rest of the summer and into fall, I continued to try and diagnose our overheating issue as well as our potential intake air leak, in addition to picking the brains of whomever was knowledgeable on the topic of carbureted engines and reading whatever material I could find on the subject.

Overall, there has been some very frustrating periods when the van was malfunctioning, but it would be a lie if I said I didn’t enjoy learning about the inner workings of the combustion engine and how to diagnose the many different problems it can have. It’s still my project to get running better and if time/money allows it, there may be some major repairs to come about in the spring. For now it will sit dormant in Vernon at the Cedar Falls Holiday Park for the remainder of winter, and as a home for us to live in while working up at Silver Star Mountain as Ski Patrol for the winter season.