I can still remember being at the airport when we arrived in New Zealand 14 months ago and was flipping through one of the local mountain bike magazines. I saw a feature for the Old Ghost Road and I knew right away I wanted to bike the trail! That first summer up in Rotorua mention of the trail came up once a month or so, but while I was working at a bike shop in Christchurch this past summer I was meeting people almost on the daily that were planning or had just returned from the Old Ghost Road. The reviews were always good regardless of the weather. Since it’s located on the west coast of the south island, historically it’s typically raining in that region most of the year.

It wasn’t until one day when a local college kid walked into the shop and mentioned that he had biked the Old Ghost loop, I was like LOOP?? It was a ~170km mission he split over 3 days. After showing me on a map of what this loop entailed, I knew that was exactly the way I wanted to bike the popular Old Ghost Trail. This grand distance also gave Marisa and I something to train for as we booked hut accommodation on the track for the first week of February (as that month statistically had the lowest rainfall throughout the year).

As the Old Ghost Road loop date approached, our 10 day weather forecast was looking like nothing but rain, however this didn’t worry me too much until I started researching a section of trail (Denniston Shortcut) that loops us back to the starting car park. I found there was a river called the Mackley, which was 100% uncrossable after or during heavy rainfall. I contacted the local bike association in Buller, and the Department of Conservation to find out how much time was needed for the river to drop to a crossable level after a big rainfall. It sounded like a few days without heavy rain would drop enough to cross.. maybe. Just in case the rain didn’t cease, I contacted a local shuttle company as back-up.

Within a couple days of our start date on the trail, the weather looked as if it was going to clear and stay clear for our entire trip! We knew these big days of pedaling were going to be testing of our endurance, so it was nice that we at least had some decent weather to accompany us. I knew that a part of Marisa almost wanted it to rain so that we couldn’t make the Mackley crossing, but she knew if the weather was good we were definitely going for it! And go for it we did! 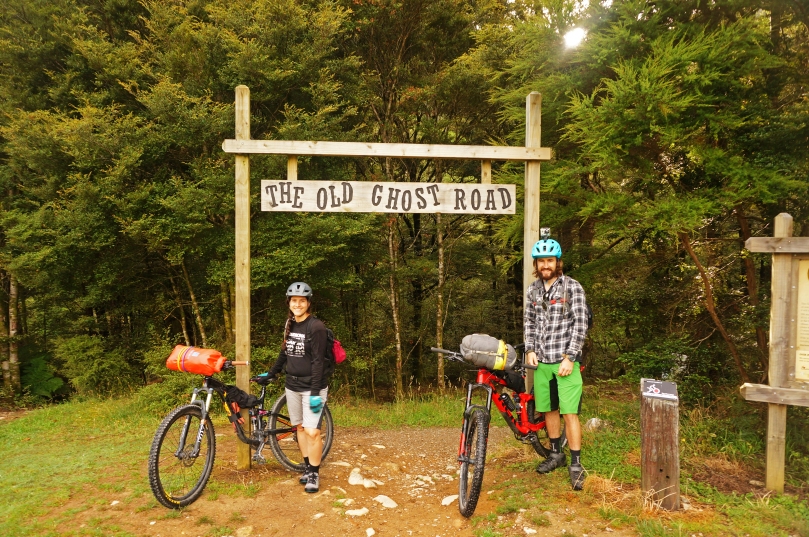 The trail head at Lyell car park where we started our bike.

One of the many creeks intersecting the trail.

This is the site of an old house part of one of the gold mining towns that used to be present on this trail many years ago. 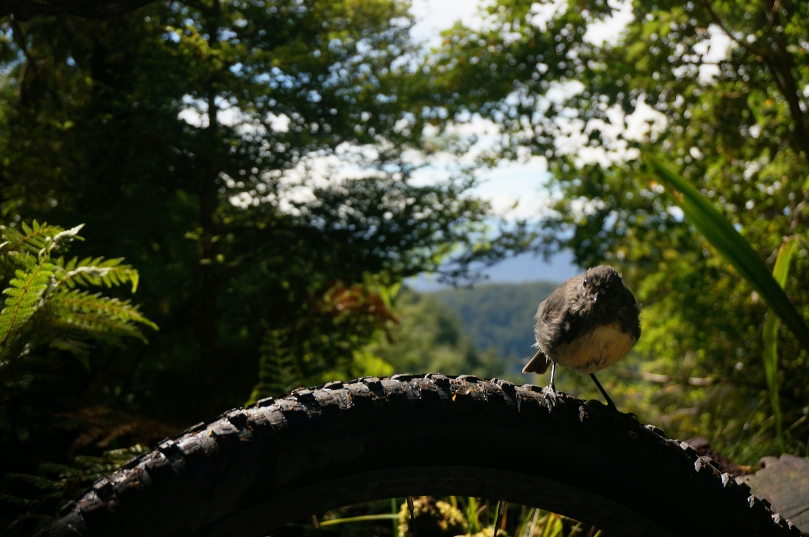 These little birds are super friendly and were fascinated by our bikes. They would land on the tires and rims and seats and peck at them. 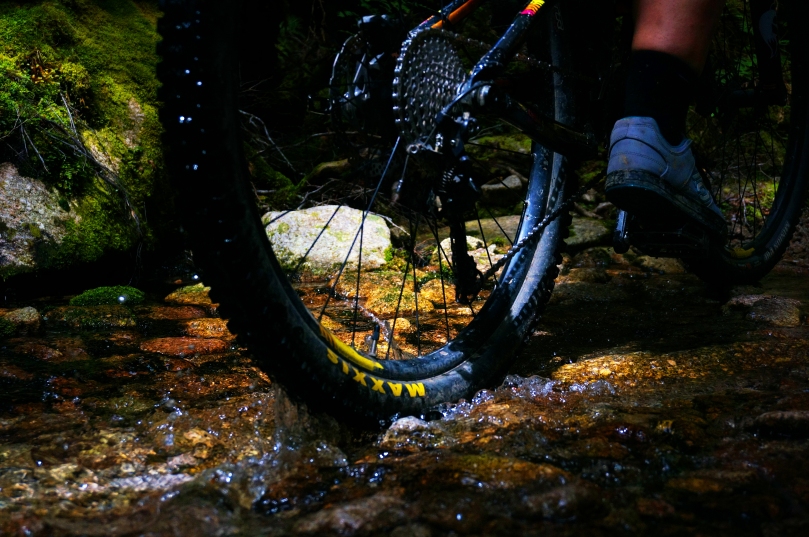 You can’t be afraid to get a little wet on this trail. There’s plently of water crossings, most of which are pedalable. This is remarkable compared to a lot of other backcountry trails we’ve done in NZ where hike-a-bike becomes pretty routine to get-up. 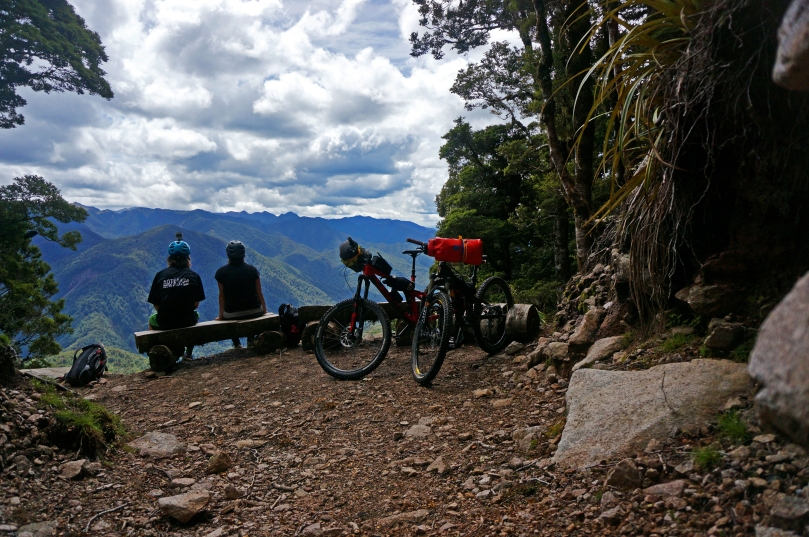 Very nicely placed bench in a clearing and there was even a log cut to fit some bikes.

All that climbing really pays off when you get into the alpine above treeline. 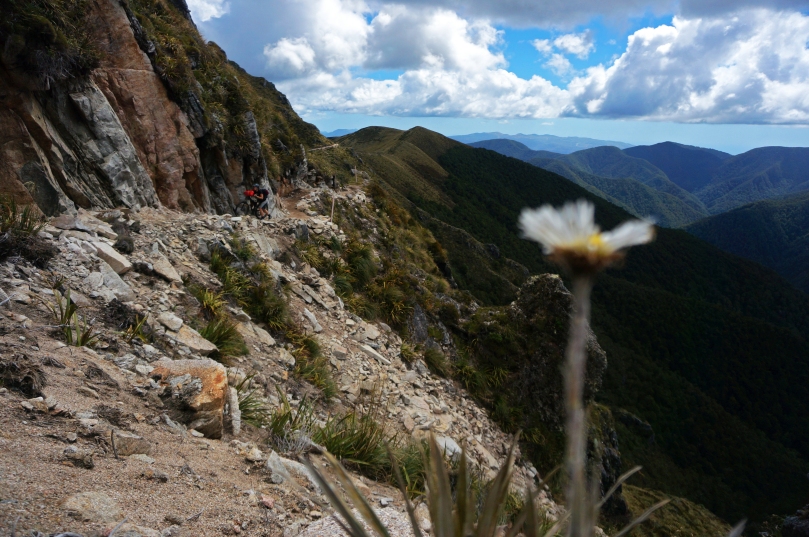 There’s no doubt the trail is well built, but the distance takes its toll on your legs and you have to resort to pushing your bike uphill sometimes.

Heavens Door: The highest point on the trail and a cool clearing in the rocks to see off into the vast distance of mountains.

After an amazing technical/ muddy downhill from Ghost Lake Hut there’s a grunty push up to Skyline Ridge. 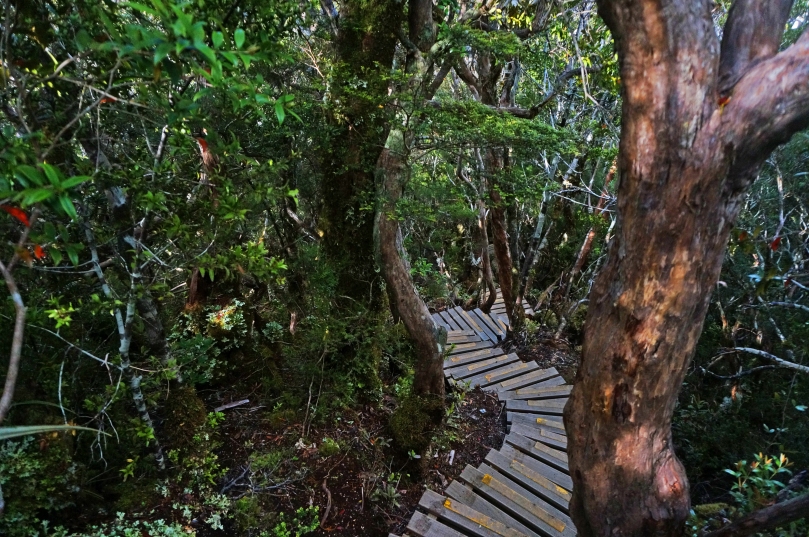 Further down skyline ridge are the Skyline Steps. These steps are quite narrow and very steep. They’re not rideable and you must dismount to get down them.

The remaining ride to stern valley hut is a very cruisy downhill.

Always time to stop and admire waterfalls whilst passing by. 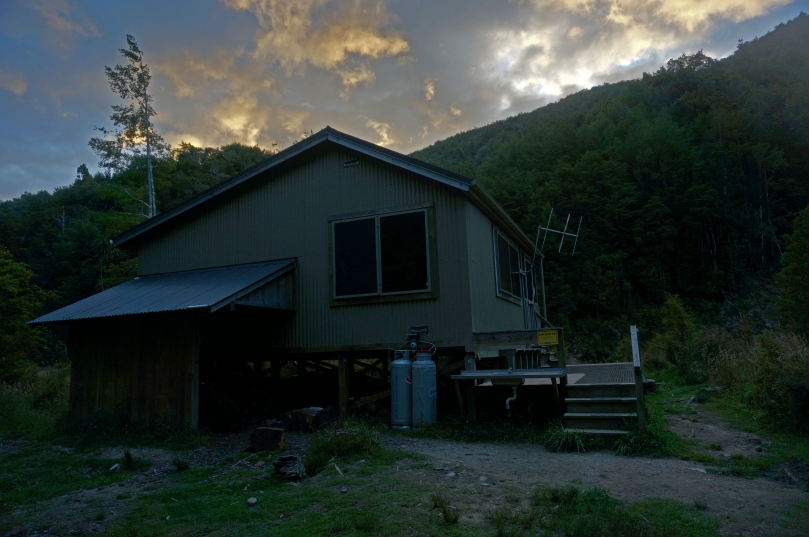 Stern valley hut, where we stayed overnight on the track with other bikers/ hikers. The huts are very well insulated and our plan to bring just fleece liners instead of full sleeping bags worked out very nicely!

The morning when we left the hut we were greeted by some local Weka’s.

The terrain continued to change as we climbed through heavily altered rock slabs by earthquakes in the past. 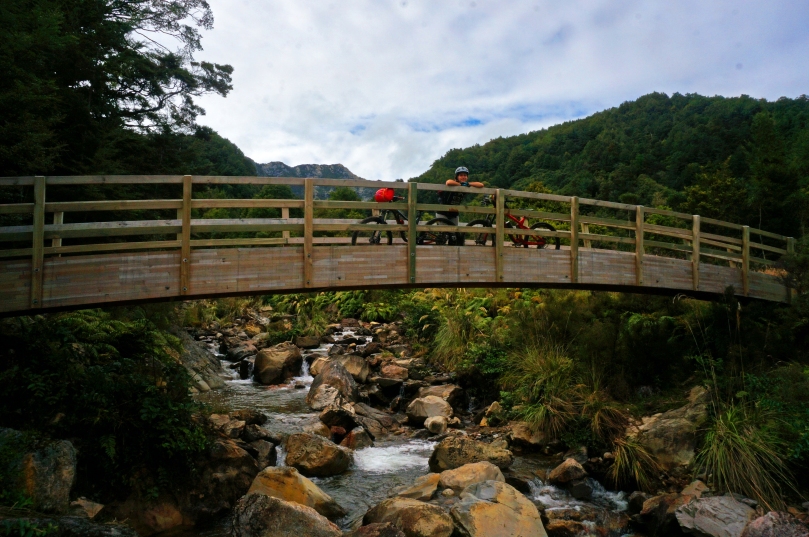 So much time and money spent building amazing bridges in the middle of nowhere.

Many many hours spent with this as our view.

It’s very rare you don’t know where you are at any given time. There are many signs indicating distances to the next milestone and the trail itself is marked very well with markers every kilometer.

This brings us to the end of the Old Ghost Trail and the start to the remaining 90 km’s. 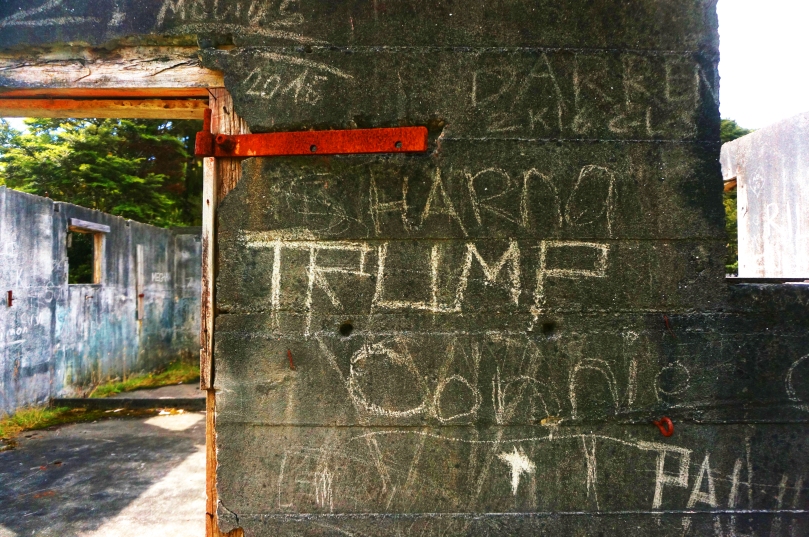 After about 5 km’s of grueling gravel road we began our trek on the charming creek track, which would lead us to our destination for the evening. 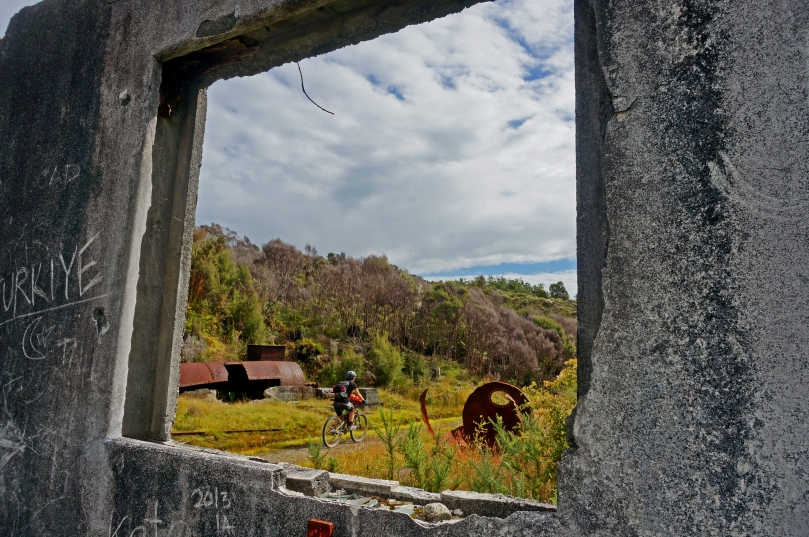 The charming creek track had its own history revolving around coal mining and  follows the actual railway track that got coal and miners out to the coast. 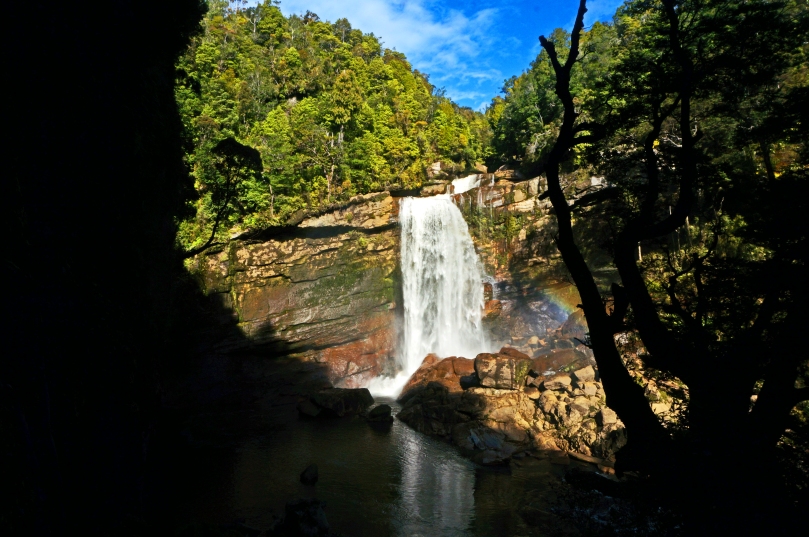 No matter how far you go back in time people always thought waterfalls were cool and when possible they would build a track to view them.

Such a huge rock!

The previous night was spent at the Charming creek tavern where we spoiled ourselves with a shower, a warm bed, and a hot dinner. The next morning the shop owner got up early with us and made us some amazing home-style ham sandwiches for our long day ahead.

After 15 km’s of biking on the highway along the ocean, we made it to Waimangaroa where we stopped for some morning pies and checked out these cool carvings on one of the front yards.

After the pies it was 9 km’s and 600m up this paved road to the old mining town of Denniston. 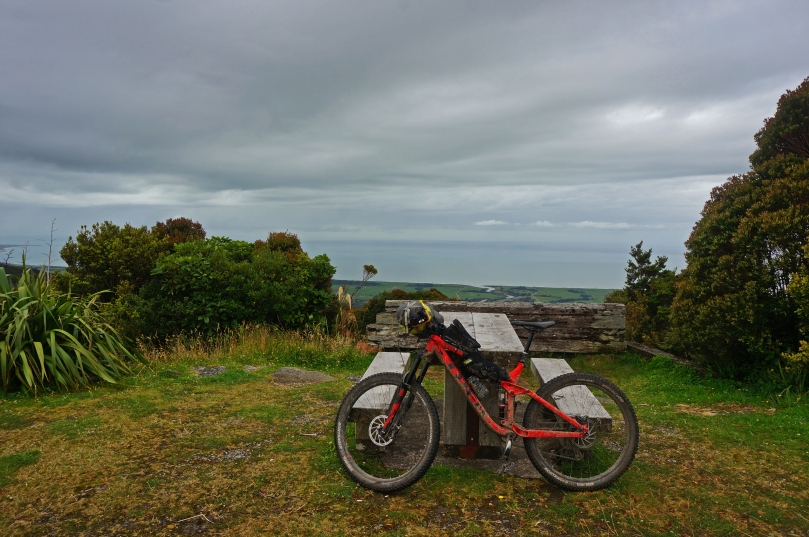 After the long grind we were at the top and in the town of Denniston!

From Denniston it was onto the Mackley Rd aka Denniston Shortcut. ~39 km of  4WD track consisting of many ups and downs along the way. 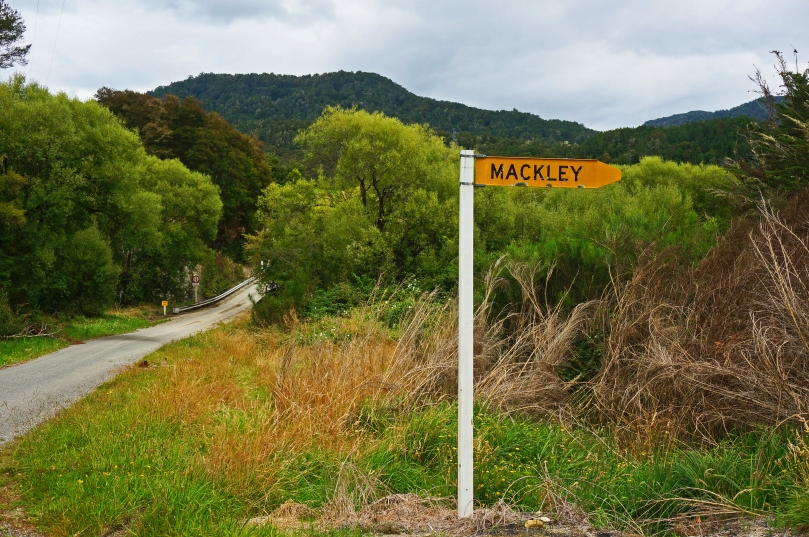 Not many photos were taken along the Denniston Shortcut maybe because we were tired or maybe because it just wasn’t that terribly exciting besides the Mackley river crossing where we were hip deep in water with our bikes above our shoulders.

Like any trail, no matter how much research I do and how many people I talk to, it can never fully be experienced without actually experiencing it. I can tell you it’s beautiful, the history is rich, and the huts are lavish.. but without going to see it for yourself you won’t fully understand how vast the views are, how great the trail grades are for climbing and descending, and how much warmer a properly insulated hut is. Even though the distances seem big compared to other backcountry trails in New Zealand, I would definitely regard The Old Ghost as a beginner backcountry trail. If you want it to be more challenging, I would suggest.. The Loop!